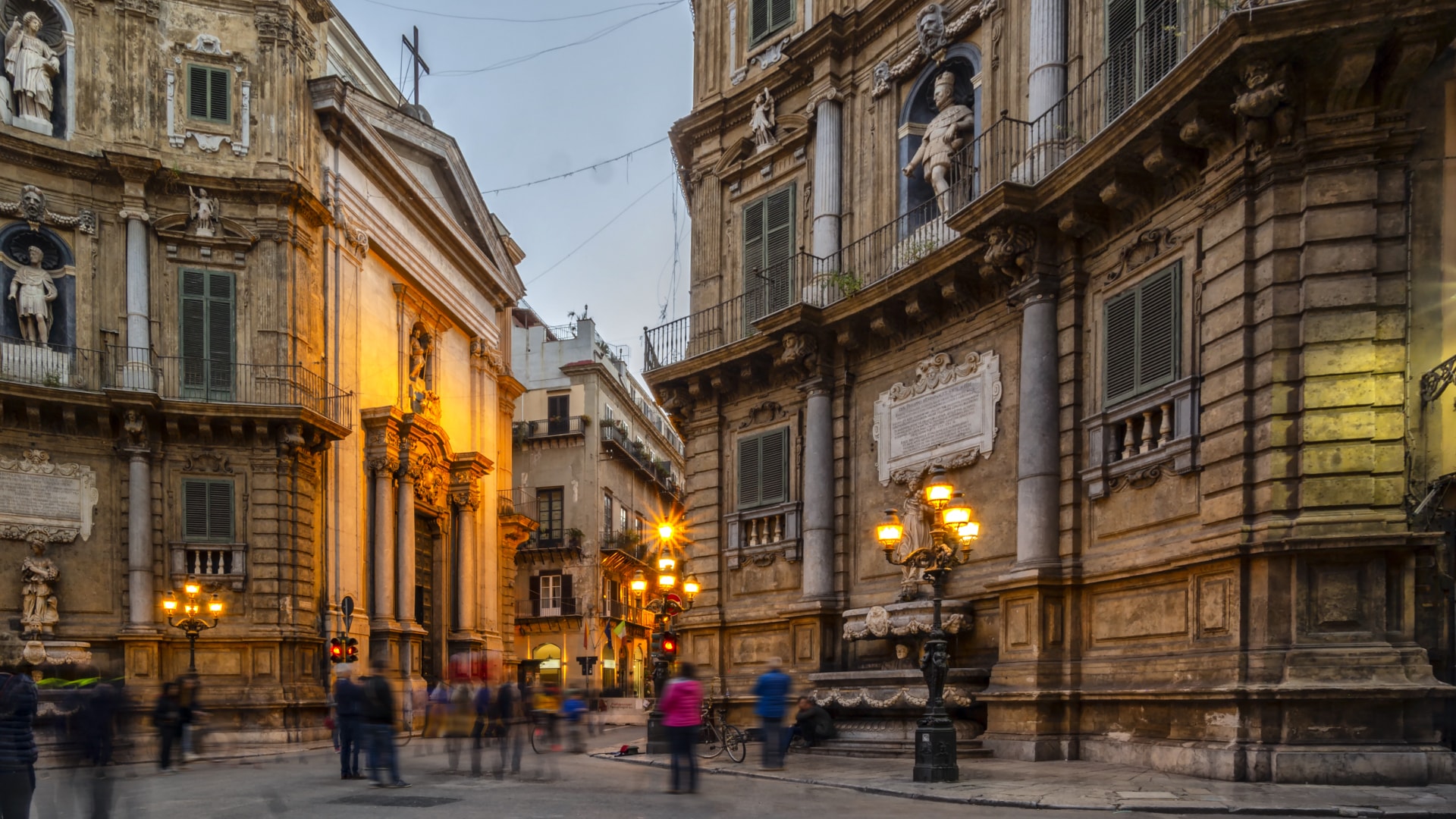 Itinerary: from the centre of Palermo to its most beautiful beaches, with a stop in Monreale, around forty kilometres in total.

Equipment: sunglasses, camera and whatever you need for a dip in the sea

After spending 2018 as the Italian Capital of Culture, to all intents and purposes dear Palermo seems to have begun a glorious journey of social and urban renaissance. And yes, a food and wine renaissance too, starting precisely with the tradition that has always distinguished it from the rest of Italy: the very close and indulgent link with street food. So we're climbing on to the seat of our Vespa and getting ready for 48 hours of surprises that we can admire, photograph and above all taste.

Our tour starts with a truly Palermo-style breakfast. No, it doesn't include the famous pairing of "granita and brioche"—yes that's very Sicilian, but decidedly more typical of the Eastern areas of the island. Rather, we decide to go to Piazza Marina, in the heart of the historic centre, to stop at Nini Franco U'Vastiddaru for the main speciality of pane e panelle, an essential snack of chick pea flour fritters in a sesame seed roll. The best choice to start our tour of the city.

Once our energy and stomachs have been properly recharged, we explore the appealing flowerbeds of Villa Garibaldi, a public garden developed in the second half of the nineteenth century by architect Giovan Battista Filippo Basile. Here, among the numerous exotic plants present, we also find a majestic Ficus macrophylla, or simply Ficus, famous for being one of the oldest and largest in Italy, with a height of 30 metres, a trunk circumference of over 21 metres and a mighty canopy 50 metres in diameter.

After a few inevitable souvenir selfies in the shade of this green giant, we devote ourselves to the Passeggiata delle Cattive: it's a historic terrace that also dates back to the nineteenth century, once used by widows—captives, in the sense of prisoners of their grief—to keep them an appropriate distance from the happier people on the Foro Italico. Strolling along the passeggiata, you can see the sea in the distance, and fully immerse yourself in the authentic charm of Palermo architecture. However, we rush back to our Vespa and get ready to go to Teatro Massimo.

Before visiting this imposing theatrical structure, built in the second half of the nineteenth century—in fact the largest building dedicated to opera in Italy, and the third largest in Europe, after the Opéra National de Paris and the Staatsoper in Vienna—we take a seat at a table in Fud Bottega Sicula, just a few steps away. And we get ready to leaf through a lovely menu where every English term is rewritten so the Italians can pronounce it correctly. Just to be clear, the word Food becomes Fud. We start with Roo Cis (Raw Cheese) and Sicilian Slais (Slice), a selection of local cheeses and meats respectively, and then we choose from a Parmigiana Burgher, with the famous aubergine-based recipe inside a sesame seed bun, an Ors Che Bab, a kebab made with horse meat, and a Niù Orlìns (New Orleans) salad with mackerel in oil, grilled courgette and Nubia red garlic.

After a coffee, we head for the entrance to the Teatro Massimo, where guided tours run from 9.30 to 6 pm every day to accompany visitors in their discovery of this unique structure.  These tours include stops in the Auditorium and the other elegant rooms inside, from the Royal Box Sitting Room and the Pompeian Hall, to the Coat of Arms Room and the Foyer. We gaze at all this history and beauty, and then climb back on the Vespa to finally head for the sea: helmets on, backpacks over our shoulders, and away we go to Mondello.

This famous neighbourhood of Palermo is just a few kilometres away from the city centre, and is known throughout Italy for its sandy beaches that allow for long, well-deserved breaks in the sun. Maybe stretched out on a sunbed, to reap the full reward. We allow ourselves a few hours of beach life, with a dip in the sea, an artisan gelato and a stroll among the splendid Liberty-style villas that populate the area. Starting the motor up again, we make our way to our accommodation for the night: we've chosen Hotel Quinto Canto, a stone's throw from Piazza Quattro Canti. A smart and elegant hotel, located in the perfect position for enjoying the best of Palermo, even after dark.

After checking in for the night, we take the Vespa and go to the Vucciria, probably the most famous market in the Sicilian capital, which has also become very popular over the years for its night life, with clubs, street food stands and various types of entertainment. There's a table waiting for us for dinner at Osteria Dadalìa, where we can stockpile caponata, sfincione and pasta with sardines. Next we go to the Taverna Azzurra and finish our evening beautifully with a signature cocktail.

The second day starts with an abundant breakfast in the hotel dining room. We then climb on our beloved Vespa and get ready to head to nearby Monreale to visit the cathedral, known as the Cattedrale di Santa Maria Nuova. Designated a UNESCO World Heritage Site in 2015, this structure has a wealth of marvellous Byzantine mosaics, among which the most well-known is without a doubt the Christ Pantocrator, which rises over the apsidal conch in all its glory.

We then return to the city centre and park near the Antica Focacceria San Francesco: a very old dining establishment opened way back in 1834, which over the decades has become a true icon of Sicilian street food. We enter this temple to tradition and order the typical Pani ca' Meusa, a sesame bun filled with pieces of fried veal spleen, to which you can add grated caciocavallo or ricotta cheese. A local speciality that absolutely must be tried.

We then go to Piazza Magione, which shares its name with the medieval Basilica, and we reach the nearby Chiesa dello Spasimo: a fascinating church built in the sixteenth century, which has gone through a tortuous history, being converted to a hospital and even a dump; salvaged in the 1980s, today it is one of the most evocative open-air theatres you can visit. But it's nearly time for a bite to eat. So we get back to our Vespa and ride to Pasticceria Costa, to try another two well-loved stars in traditional local cuisine: Her Royal Highness the Cassata, and His Esteemed Honour the Cannolo. Made strictly with very fresh ricotta and artisan candied fruit.

Revitalised with an injection of sugar, we get back in the saddle and head for the beaches at Sferracavallo, a fishing village just outside Palermo. We allow ourselves a moment to relax in the sun, and even a little swim in the waves, before enjoying the spectacular sunset and dining in one of the local restaurants, with a dish of spaghetti and sea urchins. It's like nothing else.

Back in the city, we head for the bar in Mak, a refined, modern mixology venue nestled in the Galleria delle Vittorie, in the heart of the historic centre. We flick through the menu in search of the perfect drink, and get ready to go back to the hotel. But not before making one last, unavoidable foodie stop: in fact, before bed we've got a date with Ke Palle and their arancini. Made of rice or pasta, or gourmet, with meat sauce as the classic recipe suggests, or even with aubergines, porcini mushrooms, squash and gorgonzola, shrimp and pistachios or spicy salami and mozzarella.  The perfect way to finish off a simply unforgettable trip.