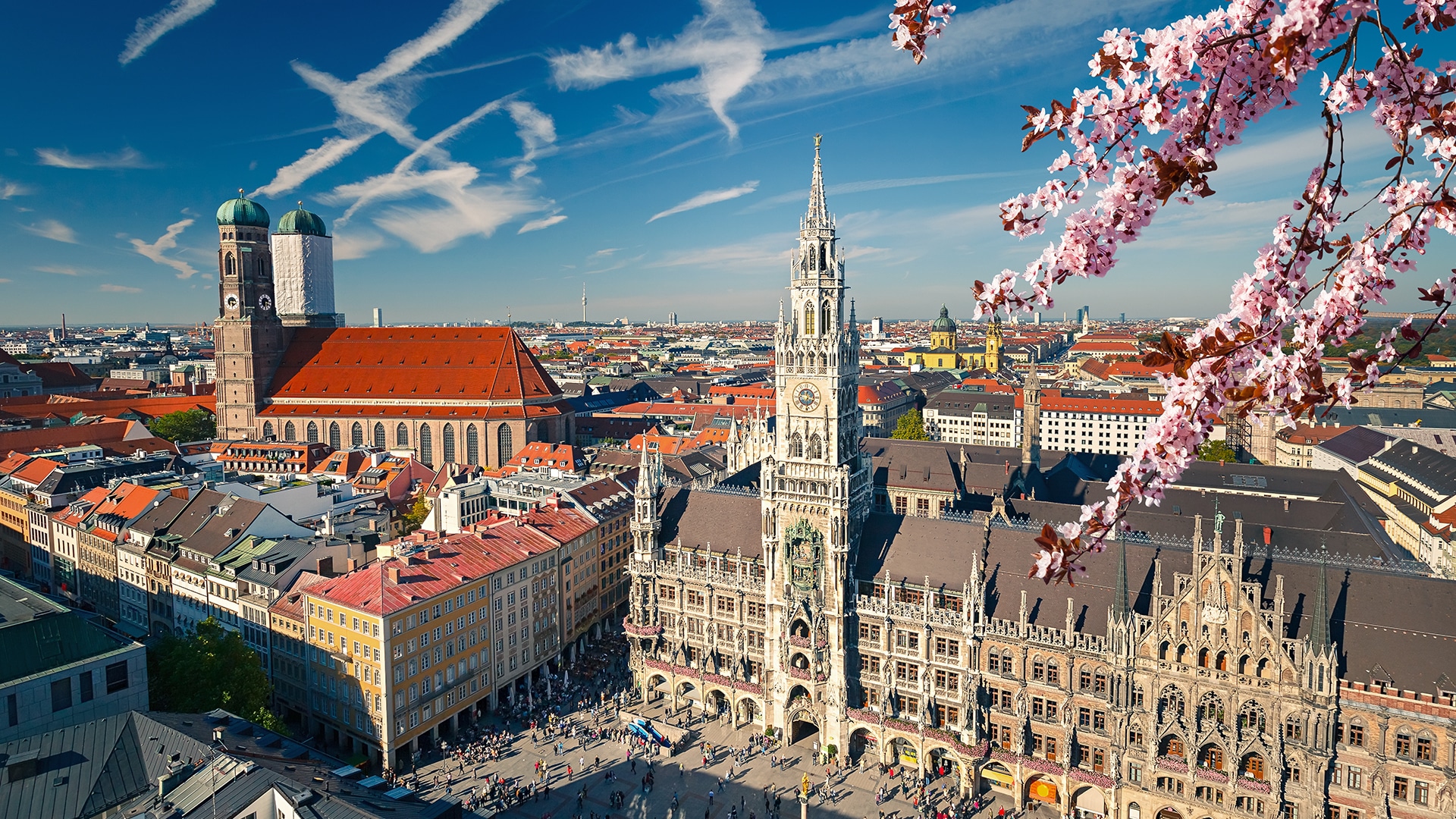 Itinerary: from Numphenburg Palace to the Englischer Garten, for a total of about 20 kilometres among the city's attractions

Equipment: a camera and a sweater for the evening

The name Munich makes you immediately imagine yourselves sitting in front of a wooden counter, singing some ditty in (your own version of) German and toasting with a big glass of beer. Nevertheless, this city, known worldwide for its Oktoberfest, has much more to offer. In terms of artistic and natural beauties, of course, but also good food.

Jump on your Vespa and stop for a hearty breakfast at the Konditorei Detterbeck restaurant where you can choose from a wide selection of sumptuous cakes with hazelnuts, whipped cream and fresh fruit. A big, tasty breakfast is ideal before heading to the Nymphenburg Palace: a Castle in Baroque style and the former summer residence of the King of Bavaria, which is located in the middle of a magnificent French formal garden. A great backdrop for photos.

Just nearby, you will find the beautiful Munich Botanischer Garten, one of the world's most famous and best kept botanical gardens, that preserves more than 14,000 plants. Among these are even secular, tropical and subtropical specimens, which become shelters for squirrels, frogs and turtles. To end your morning in a great way before moving toward the centre of town for lunch, park your Vespa in front of Brezelina, and enjoy – as the name suggests – a wonderful brezel, a pretzel stuffed with cheese and ham.

Put on your helmet and head towards the heart of the Bavarian city. You will reach Munich's cathedral, the Frauenkirche, famous for its two front bell towers topped with brass onion domes. At the entrance, you can find the Teufelstritt, what has been christened "the devil’s footprint." The legend says that the Devil went inside to survey the work. Although there was light, there seemed to be no windows, and the devil was satisfied. But then when he took another step further, the columns that had been blocking the view of the windows opened up and, in his fury at being tricked, he stomped his foot, forever marking the floor with his black footprint.

After leaving the Cathedral, take a walk around, then go to Buddy Hotel – an entertaining structure with brightly coloured modern rooms and perfect for the night. After getting settled for the evening, say goodbye to your Vespa with the promise to return soon and walk towards the Zum Augustiner restaurant, a pub with the most ancient history of the entire city. Sit down at one of its tables, maybe even in the garden or under the imposing arches of the building, and enjoy a nice glass of beer, accompanied by the best Bavarian specialities – maybe a hearty pork knuckle, or some wurstel with mustard and dips. The walk back to the hotel will allow you to burn some of the calories... Or maybe not, but that hardly matters.

The next morning, leave the Buddy Hotel and retrieve your Vespa to reach the Café Maelu, a lovely Patisserie where you will be able to indulge in cakes once again. After some apple strudels and pastries continue towards your destination of the day: the Englischer Garten, a huge public park that extends from the city centre to its north-eastern suburbs. It’s a sort of wonder that dates from the second half of the eighteenth century, giving a myriad of ideas to its visitors. Inside you’ll find the Monopteros, a graceful circular neoclassical Temple, as well as the Kleinhesseloh Lake, fed by the man-made Eisbach River, along which you can relax and cool off.

For lunch, head to the Chinese Tower, a 25-metre high structure resembling a pagoda, whose beer garden includes over 7,000 seats. Enjoy the view, but especially a plate of pork chops with plenty of sauce... or another pretzel, stuffed as you wish. Continue your visit in the park and reach the Japanisches Teehaus: a true Japanese tea house, where – by checking the event calendar – you can watch the typical traditional Oriental tea ceremony. A magical ritual, which will conclude your two days in Munich perfectly.

Enjoying Palermo and all its street food