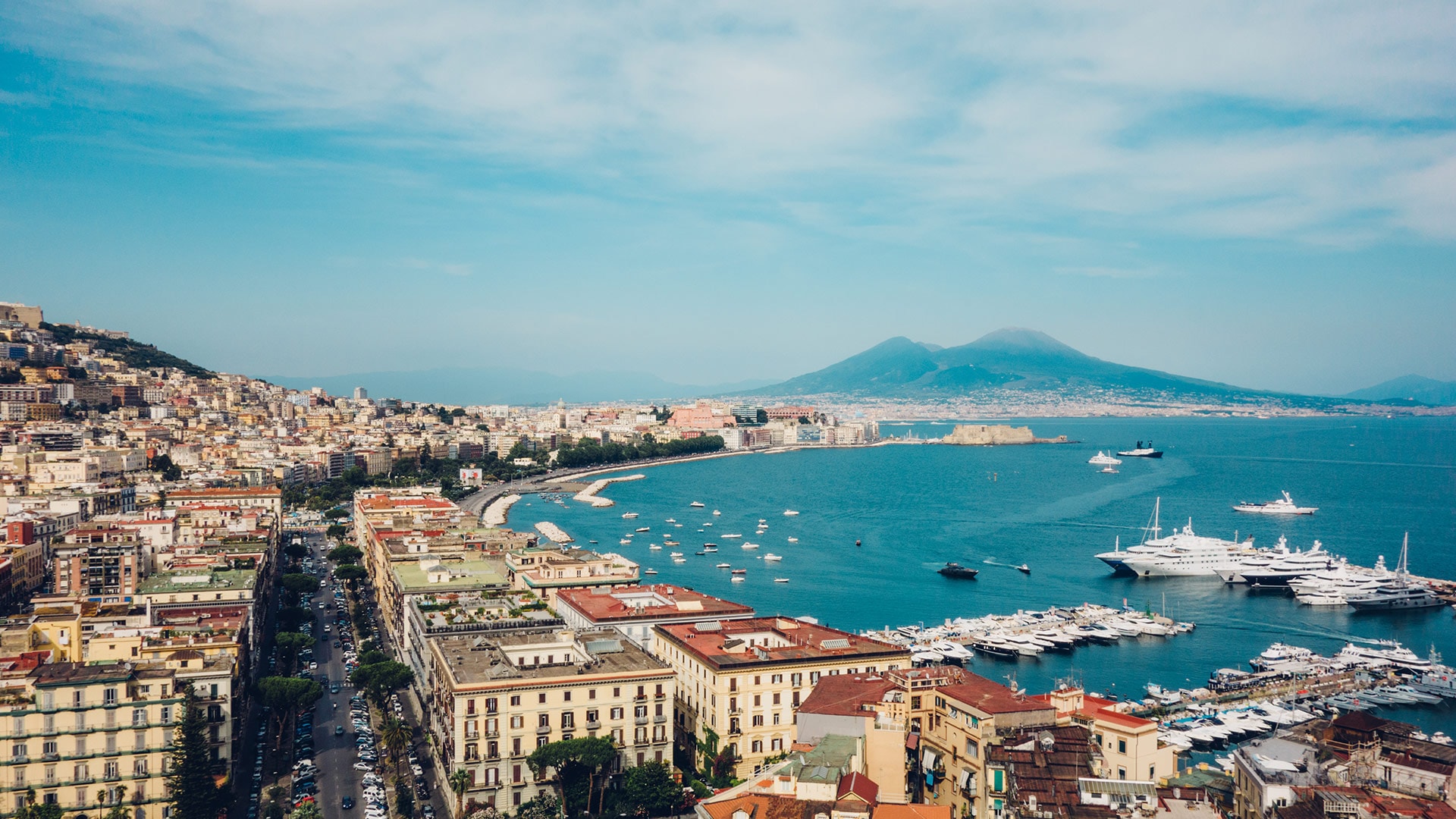 Itinerary: departure from Naples to reach Aversa, Nerano and Battipaglia, returning to Naples, about 370 kilometres

Equipment: everything you need for a few magical days among shops, restaurants and dairies

Some like it salty, rich, flavourful to such an extent as to leave a strong taste in the mouth, the so-called ‘Buffalo breath’ as described by Italian journalist Roberto Saviano in a Facebook post a couple of years ago. Others, as stated in the Italian movie “Miseria e Nobiltà” with Totò, like biting it while it drips milk. Buffalo mozzarella, one of the most delicious foods in the world comes from the Campania region. This is the place to enjoy the authentic and original cheese, therefore, get on your Vespa, your faithful travel companion, and go discover the best mozzarella.

There are two main types of Buffalo mozzarella: the creamy, sweet and delicate kind from Battipaglia, in the Salerno area, which stands in contrast to the tangy and flavorful kind from Aversa, south of Caserta. Finally, for those with a penchant for smoked taste, there's also the provola cheese, typical of the territory in the Cilento region. Your itinerary is 370 kilometres in 5 days, with the possibility of extending the trip down to the border with Molise and Calabria. The starting point is Naples, where you'll need more than one day to take in all the sights in this Vespa-friendly city. Go to the Maradona mural in the Spanish Quarters; the much-adored football player left his mark when he played for the city team. To get into true Neapolitan spirit, go to Nennella restaurant. Otherwise, a great street food styled alternative is located via Simonelli 54, near piazza della Carità. You won’t find a sign outside, but Antonio and Gennaro, father and son, can prepare the best fried pizza in all of Naples, so it’s worth looking for.

If you want to enjoy a beautiful view, nothing is like Castel Sant' Elmo, easily reachable on your Vespa from Vomero or alternatively through the cable railway: the view of Naples, the Gulf and Mount Vesuvius will make you fall in love with this city. Finally, there is no better way than riding your Vespa starting from Castel dell'Ovo and going through Chiaia, slowly heading to Posillipo and Mare Chiaro, until Coroglio and the caves of Sejanus. Have a pizza at Sorbillo in via dei Tribunali (although you will have to queue), or alternatively at Starita, in the Mater Dei district, and then time for bed.

However, don’t forget the purpose of your trip: Buffalo mozzarella. Get up early and head to Pozzuoli, about 20km away, for a day trip. From here take the Via Domiziana, the ancient roman road that continues up to Rome. Stop at Castel Volturno, a seaside village rich in history, and where Naples’ football team trains. Above all the town houses is the Ponte a Mare cheese dairy: here, you can enjoy your first Buffalo mozzarella and buy some provola cheese. Many consider this is where the queen of mozzarella cheese is produced, in a candid white colour. The shop is family managed; you can either book in advance, or queue with the other customers to experience it to the fullest, especially if you know the dialect. To taste it super fresh, get there at lunchtime.

Travel 30 kilometres inland, towards Aversa. This is where the monks of the San Lorenzo monastery in Capua moved to, in the twelfth century, to offer pilgrims a cheese called 'mozza' or 'provatura' – evidently, Buffalo mozzarella was already popular in the middle ages. Choosing the best cheese dairy in Aversa is nearly impossible, but one is worth mentioning: Caputo in viale Olimpico, was founded by a gentleman called Alberto who started working in the business in 1977 in the nearby Teverola and in the past provided catering for the G7 events in Naples. The quality of products in the area, however, is so high that you can go to any grocery shop, and you can't go wrong. Go back to Naples and admire the sunset through your helmet as you ride.

Day three: 30 kilometres south of Naples is Castellamare di Stabbia, a town famous for its thermal baths. It can be reached through the villages lying at the foot of Mount Vesuvius: San Giorgio a Cremano, Portici – where you should visit the wonderful Porticciolo del Granatello – and Herculaneum and its ruins, Torre del Greco, Torre Annunziata and of course, Pompeii. Start early with a delicious breakfast at the bakery Sal de Riso di Vico Equense: the lemon cake here is an institution, partly because citrus fruits are a specialty of the Sorrento Coast. The scenery from the Vespa is magical, as you pass all the small villages along the coast overlooking the sea.

Drive to the end of the Gulf of Naples, towards Sorrento and stop in Sant'Agata sui due Golfi: the view from the Desert Monastery of the Benedictine nuns on the hill is spectacular. Continue on highway 163, where lovely old ladies sell lemons and oranges by the kilo along the roadside, and stop for lunch in Nerano to taste the spaghetti "alla Nerano" at Mariagrazia restaurant. Boats full of people come in from Capri specifically for this zucchini and provolone del Monaco dish. Fifty kilometres East of here, is Positano: the colours and magic of this gem on the Gulf of Salerno will make you want to stay forever.

Resuming your quest, Buffalo mozzarella awaits you in Battipaglia. The best way to get there is along the Amalfi coast. On the fourth day, stop in beautiful Amalfi, preferably early in the morning, and then Cetara, where colatura di alici (anchovy sauce) is another culinary masterpiece of the territory – try it for lunch at the trattoria Acquapazza. About six kilometres further up, Vietri sul Mare is another gem and a Unesco World Heritage site worth visiting. Spend your last night in Salerno, 12 kilometres away. The Villa della Filanda, close to the centre is very good value for money.

The next day, travel to Battipaglia, 30 kilometres away. Stick to the coast until Spineta, then head West inland. The most renowned dairy shop is La Contadina di Di Masi: it all started here in 1983, when farmer Alfonso Di Masi, facing a crisis period in milk production, came up with the idea that created the current version of mozzarella. Another important landmark is La Fattoria dairy, which produces the famous, giant 5kg, creamy mozzarella denominated Zizzona di Battipaglia. If you are not tired, continue South and go to Paestum, another place where the tradition of Bufalo Mozzarella is strong. Get a bite and return to Naples completely satisfied.

Enjoying Palermo and all its street food